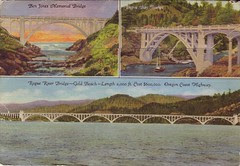 Oregon Coast Highway Souvenir Folder
Originally uploaded by Jasperdo
Thanks to Flickr user Jasperdo we have a great set of historic postcards up at Flickr showcasing the Oregon Coast.

Click on the picture for more of this neat set which appears to be from 1951 after the completion of the Oregon Coast Highway, still one of the world's most scenic drives.

Bridges along the coast remain one of the state's attractions as they span the many rivers and streams as they spill into the Pacific all along the Oregon Coastline.

The cards list the cost of the Gold Beach Bridge, a beautiful concrete structure over the Rogue River, as $600,000 - millions shy of the budget just a few years ago to paint and restore this beautiful, massive span at the mouth of the Rogue River. 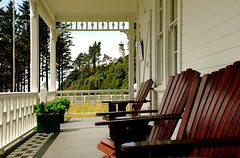 Heceta light House Bed & Breakfast
Originally uploaded by d70focus
One of the things I love about Oregon is how many "Once in a lifetime" experiences you can have here - even on a short trip.

Here at Heceta Head lighthouse near Florence Oregon you can spend the night in the keeper's quarters which are just a short walk from the lighthouse itself.

Some other great lodging experiences in Oregon are the lodge at Crater Lake, Timberline Lodge at Mount Hood, The Oregon Caves Chateau at Oregon Caves National Monument, McMenamin's Estate south of Portland, the Benson Hotel in Portland, the Columbia Gorge Hotel in Hood River, Weasku Inn in near Grants Pass on the Rogue River, and more. All of these offer you an historic attraction and adventure as well as fine accommodations.

Winter on the Oregon coast 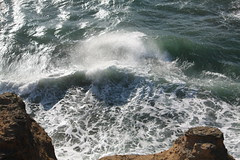 Sequence of waves along Oregon coast
Originally uploaded by anneh632
My favorite time to visit the Oregon Coast *by far* is the late fall and winter, when the wave action is nothing short of spectacular, especially at places like Devil's Churn, Cape Arago, and the many other rocky shoreline areas.

The surf in winter along much of the Oregon Coast has waves topping 20 feet pounding into the rocks, shooting spray up 100 feet and more. Storms add to the excitement but even on relatively calm days you can find great spots to sit and wonder at the sheer power of tons of water crashing into the rocks every few seconds.

For Beachcombers the Oregon Coast winter brings a wealth of fascinating biology and treasure, especially in areas where tidepools fill with sea anemones, starfish, and other creatures while you're much more likely to find great shells and agates - the variegated semiprecious stones that form in cavities of other rocks and then drop out as stone masses are broken down by the sea.