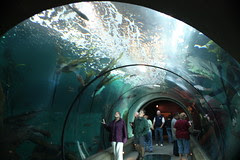 Pictured is the walk through shark tank where the fish swim all around you.

More information is at the official OCA website: www.aquarium.org

The Oregon Coast Highway 101, the longest of the US National Scenic Byways, was recently awarded one of the best road trips in the USA by a European travel magazine. It's no wonder because the Oregon Coast Highway offers a spectacular 363 mile journey through oceanscapes, landscapes, and US History. Beautiful lighthouses and bridges punctuate a coast characterized by sea stacks, pounding surf, and a lush carpet of spruce and fir forest. Dozens of small towns grace the highway that stretches all the way from Astoria in the north to Brookings on the south Coast, also known as the "Wild Rivers Coast". 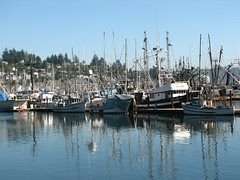 harbor
Originally uploaded by TooFarNorth
Commercial Fishing is still a major industry in Oregon although restrictions on salmon and crabbing mean that seasonal issues are very important in terms of the availability of the two most prized fruits of the fertile Oregon Coast - Dungeness Crab and Wild Salmon.

Dungeness crabs, with succulent white meat in the body and legs, was common food for native Americans but is not prized as a modest priced delicacy. The Dungeness Crab season generally begins about December 1 and although it goes on for several months the prices tend to get high later in the season. Also I've heard that the earliest crabs tend to be meatier though that may just be a fishing story.

Wild Salmon is generally preferred to the cheaper and far more easily available farmed version. Wild has a darker red color and is richer in taste and texture. At native American BBQs you can sometimes enjoy fresh salmon smoked in pits the ancestral fashion, skewered on sticks that are stuck into the ground next to the pits with the fish located above the flame. 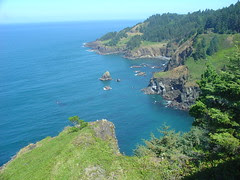 Cape Foulweather was discoverd and named in 1778 by the famous British navigator Captain James Cook. It was at this Point that Captain Cook first sighted the mainland of North America on the Pacific Coast, and one of the sudden storms which greeted his arrival almost put an end to his historical expedition. The fierceness of the storm is reflected by the name he gave this rugged landmark - Cape Foulweather. Oregon's magnificent coast is as dangerous as it is beautiful, and during bad weather in the winter the Oregon Coast is hazardous to small and large craft alike. Many lighthouses guard the Oregon Coast but shipwrecks, especially small fishing craft, are still common along the coast especially during winter.

The Cape Foulweather Lookout is perched atop the promontory from which this picture was taken, which rises 500 feet above sea level.

From here you see the crashing surf along the shore, sea birds nesting on the rocks, sea lions basking in the sun, fleets of fishing boats in search of salmon, ocean liners whose wisps of smoke string out along the far horizon. Whale Watching, unbelievable sunsets, and in winter visitors enjoy the peaceful calm which follows the violence of a sudden storm.

Kites along the Oregon Coast

IMG_1508
Originally uploaded by katrinket
Kites are very popular along the Oregon coast, and some cities sponsor annual kite festivals where the kites can get quite extraordinary. Winds at many beaches are great for kite flying so when you plan your trip bring one along, or plan to buy one when you get to the Oregon Coast. 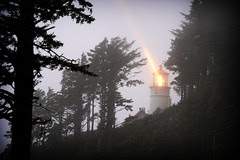 IMG_0139
Originally uploaded by Brian9000
The Lighthouses of the Oregon Coast offer an almost magical intersection of beauty, history, form and function. Lighthouses are perched atop many of the most precarious and dangerous Oregon Coast cliffsides of Oregon to warn mariners away from the undersea perils or rocks below.

I think this is the North Umpqua Light but it was not tagged. North Umpqua is also an Oregon State Park that offers camping in lush spruce forest below the lighthouse.

As we've noted before you can even stay in the keepers quarters of Heceta Head light. If you are lucky you may even catch a glimpse of the ghost reported to live there.