Lighthouse
Originally uploaded by jeffk
This beautiful Oregon Coast Lighthouse is one of the state's most recognized coastal landmarks. Guarding the Oregon Coast for over 100 years, the Heceta Head light is a great short walk and tours of the light are available seasonally.

For overnight visits you'll want to consider staying in the keepers house, just down from the lighthouse, which has been converted into a Bed and Breakfast. Details are here: http://www.hecetalighthouse.com/ 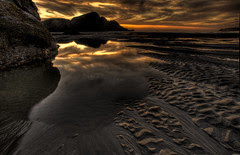 A superb source of Oregon Coast and Oregon road information is to be had at TripCheck.com, the website of the Oregon Department of Transportation where you'll find road cams, road reports, and links to many other Oregon Coast travel resources:

This is an updating photo of McCullough Bridge on the coast near North Bend, but you'll also find this information here.

Birding along the Oregon Coast can be a casual affair or a lifelong passion, as there are hundreds of species showing the remarkable evolutionary diversity created as ecosystems collide along Oregon's complex Coastline.

This website from the Federal Wildlife Administration showcases Oregon Coast bird santuaries where the Oregon Coast Birding Trail website will gives you a guide to species you'll find along the Southern, Central, and Northern parts of the Oregon Coast.

Personally, I'm a fan of the Puffin - stout sea birds that nest in cliffs and have a large, strong orange beek used to crush shellfish for dinner. Also the Osprey which tends to live atop large tree snags (dead trees) in huge nests.

Birding enthusiasts will also want to consider a trip to the Klamath Basin Birding Trail.

Oregon Coast
Originally uploaded by ArtBrom
This beautiful shot is along the North Oregon Coast I think but not sure. I'm less familiar with the areas north of Lincoln City than points south of Lincoln City, one of the coast's larger cities and a very popular vacation destination for folks heading to the coast from the Portland area.

Unlike California where many of the coastal cities are major metropolitan areas (San Francisco, Los Angeles, San Diego), Oregon has no large cities along its 363 miles of coastal highway 101, the asphalt thread that winds all the way from Astoria to Brookings. Instead, you'll find more than a dozen cities of moderate to small size, many with tourism as the mainstay of the economy although larger cities like Brookings, Gold Beach, Florence, Lincoln City, Newport, and Astoria all have identities that go far beyond their roots in tourism.

Devil's Churn on the Oregon Coast near Cape Perpetua 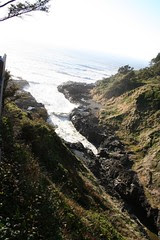 IMG_1362
Originally uploaded by djtansey
As I noted in the earler post, Devil's Churn offers some amazing surf action as the waves pour into a narrow volcanic canyon. There's a trail down to Devil's Churn where the views can be awesome if conditions are right. As always along our Oregon Coast be *very* careful whenever you are at the shoreline, especially at places on the Coast like Devil's Churn where a simple fall could lead to great injury in the craggy rocks and choppy surf right below. 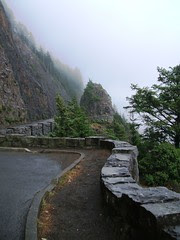 Oregon Coast
Originally uploaded by Darin Barry
The Oregon Coast offers those who drive the byway hundreds of turnoffs like this one with views that vary as much as the wonderful natural features of Oregon. Spruce and fir forests, towering cliffs and sea stacks, and wide sandy beaches are all here.

My personal favorite spot on the coast - though there are many superb places - is Devil's Churn just across from the Cape Perpetual lookout. A short hike down from Highway 101 also known as the Pacific Coast National Scenic Byway, takes you down to the shorline where volcanism has created a long narrow passage of hundreds of feet. If the tide is right and the surf is big the waves crash into this area like a freight train - gushing in and out of the Devils Churn in spectacular fashion. I'll try to find a photo of the Churn for the next post.

Welcome to the Oregon Coast Travel blog, where we'll be posting a lot more regularly in the coming months about travelling along the magnificent Oregon Coast from Brookings to Astoria.

A companion website to this blog and to the Oregon Coast region's travel guide is 101MileByMile where you will fine information about every mile of the Oregon Coast Highway 101, a splendid 363 mile ribbon of road that winds along the coast from Brookings-Harbor near the California Border to Astoria on the Columbia River which separates Oregon from Washington State. Highway 101 also serves most of California and all of Washington, ending at the Canadian border where it becomes a Canadian road.