British PM David Cameron has commented on the role of Pakistan in exporting terror. The government of Pakistan has responded that he is ignoring the role that Pakistan has played in the war on terror.

On the contrary, he seems to be painfully aware of its role, as do his present hosts in India. The quasi-governmental or simply governmental support for nefarious activities in Afghanistan, Kashmir, and Mumbai, and the part they played in exporting nuclear weapon technology to rogue states like North Korea is well known.

What they probably mean is that Cameron is not taking seriously their pretend role in the war on terrorism, the role for which the United States pays them billions of dollars. 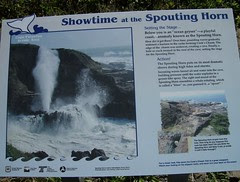 Oregon Coast
Originally uploaded by JoeDuck
Spouting Horn on the Oregon Coast is a really neat feature, but you need to be there at the right tidal time to see it spout. This is near Cape Perpetua on the Central Coast along with some of the best scenery you will find in America.